Vintner Agustin Huneeus has been discovering great vineyards of the world spanning five decades and 15 countries.

Agustin and his wife Valeria founded the Quintessa estate in the renowned Rutherford District of Napa Valley in 1990 and in 2005, after years of running global wine companies Agustin established a family portfolio of wines that represent the finest vineyard estates in California and Oregon.

In addition to the Quintessa estate, the family’s vineyard and winery projects include Faust Napa Valley Cabernet Sauvignon and Illumination by Quintessa, an aromatic white wine. In 2009, the Huneeus family forged a partnership with Joan and Walt Flowers of Flowers Vineyards & Winery, pioneering vintners who in 1989, established two extraordinary vineyards dedicated to world-class Chardonnay and Pinot Noir in the extreme Sonoma Coast.

In 2017, Andy Erickson, former winemaker for Screaming Eagle, joined as partners on his red blend project Leviathan, which began in 2004. Most recently in 2018, the Huneeus family has partnered with long-time family friends Steve and Carol Girard of Benton-Lane from the Willamette Valley, Oregon. 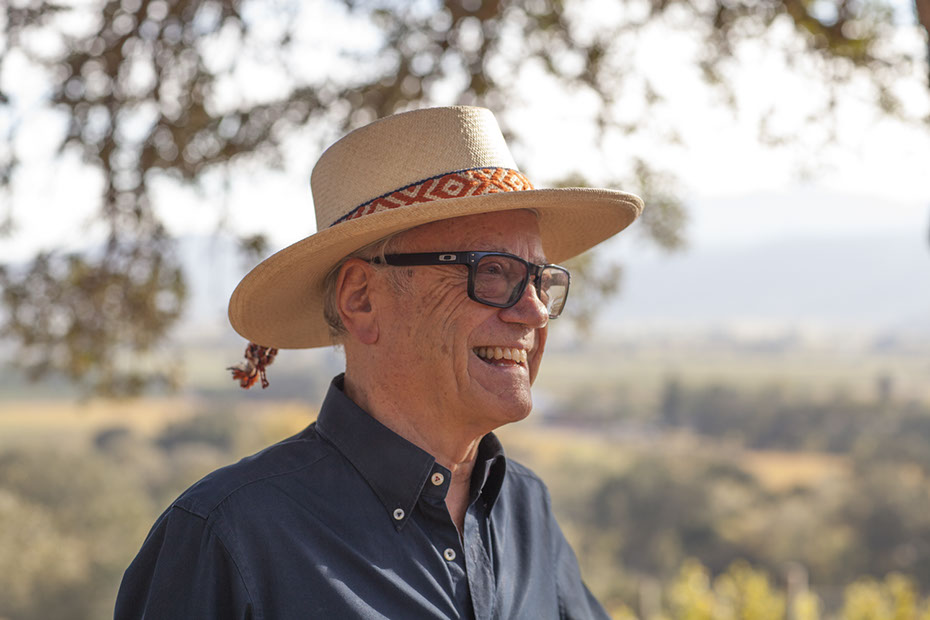 Agustin Huneeus is the proprietor for Quintessa, one of the Napa Valley’s most highly regarded wineries. One of the few vintners who has dedicated his entire professional life to the wine industry, Agustin began his more than 50-year career in the city where he was born — Santiago, Chile.

Agustin entered the Chilean wine business in 1960 as chief executive officer of Concha y Toro. At the time a small winery, Concha y Toro grew under his leadership to become Chile’s largest winery. In 1971, Chile’s difficult political climate led Agustin to leave his home country. He moved to New York and subsequently headed Seagram’s worldwide wine operations, which included fourteen wineries in nine countries, including Paul Masson in the United States. Upon leaving Seagram, he founded Noble Vineyard in California’s Central Valley in 1977 and later acquired Concannon Vineyard, a premium winery in the Livermore Valley.

In 1985, Agustin became partner and acting president of Franciscan Estates. While there, he developed numerous brands and wineries, turning the ailing company into a successful group of premium wine estates. These estates included Franciscan, Estancia, Mount Veeder, and Veramonte Winery in Chile, which he created. In 1999, he sold his interest in Franciscan Estates and created Huneeus Vintners, a company dedicated to fine wine properties.

In 1996, he was awarded the Distinguished Service Award by Wine Spectator magazine for his “significant and long-lasting contributions to the wine industry.”

While he was active in the wine business as an entrepreneur, Agustin also played an important role in industry affairs. He has had directorial positions in the Chilean Wine Exporters Association, The California Wine Institute, The Napa Vintners Association, and many other industry organizations.

Agustin has dedicated his attention and efforts to endeavors that satisfy his more humanistic interests. He sits on the Advisory Board for both the Center for Latin American Studies at the University of California, Berkeley and the Friends of the Catholic University of Chile, and he is a board member of the Chile-California Council.

“I believe that we are stewards of the land.” This is the quietly stated philosophy of Valeria Huneeus, Ph.D., microbiologist, viticulturist and architect of the Quintessa vineyard. Valeria stumbled on the Rutherford property during a time when she was searching for a new vineyard management project, one that would allow her to work closer to her husband than had her previous commitments. Her vision and perseverance made it possible to buy the property, which more than a dozen other suitors had failed in their efforts to purchase.

Born in Chile, Valeria originally intended to study medicine, but redirected her love of science into viticulture and enology. After graduating from the University of Chile, she worked as a viticulturist in the Southern Hemisphere. When Valeria and Agustin moved to New York and began a family, Valeria broadened her interests, pursuing a Ph.D. in biochemistry from Columbia University. She then spent ten years doing research in cholesterol and cell metabolism with the Veterans Administration and the University of California at San Francisco.

“I wanted to see the sun again,” she smiles, explaining the next curve in her career: developing the Mistral vineyard in Santa Clara County with her husband. This project gave her valuable practical experience that she was able to use in the development of Quintessa.

“Quintessa was a rare opportunity,” she reflects,
“but the topography was
a great challenge.”

An avid proponent of a sustainable approach to agriculture that seeks harmony with the land, Valeria took special care to be respectful of the landscape and the soil. Many other facets of this philosophy have been applied to the development of the Quintessa vineyard and its daily care.